Welcome back to the conclusion of the two day Alamo 40K IGT in San Antonio, TX. Everyone had a great time, least of all me so once again I'd like to thank all the tournament organizers and all my opponents! 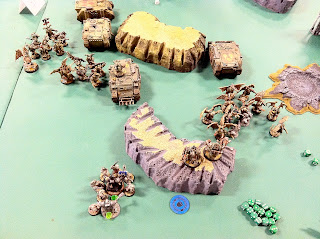 ~Kirk was a super friendly guy, and even with Grey Knights his army was pretty cool. I'd never seen anyone take those Ghost Terminators before or the Terminator Justicar that can stand up like the Saint. I figured this was going to be a really fun game. I am really disappointed I didn't get a picture of this army, the Ghost unit was particularly awesome looking.

My Possessed rolled Furious Charge again which would be great for just dishing out wounds and making those GKs take saves, after all, they do die like normal Space Marines. I set up first with four Rhinos and for once, deployed my Oblitz instead of deep striking them. His Grand Master rolled high and he was able to make every model in his army scoring (nice). He deployed Deepstruck his two Terminator units and deployed the other units behind a building with his objective.

First Turn I moved up but couldn't see anything to shoot. His turn he Deep Struck Mordrak onto my objective and Shunted the intercepters and Dreadknight basically on top of my Rhinos. In my turn my Oblitz blasted the Termis, the Possessed ate the Intercepters and one Lord Killed the Dreadknight... it was all down hill from there.

Kirk was super friendly and a great opponent to play with at 8 in the morning. I ended up giving him my "Fluff Bunny" award because of his use of special characters I'd never seen before. NTM neither of those characters even got to use their special rules, his rolling was pretty sad. 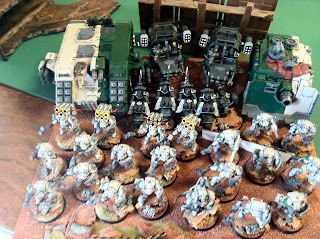 ~ending the tournament against Jay was great. Since I stopped playing IG we have had nothing but fun games; mostly because neither of us are all that excited about 5th anymore and can just roll some dice and see where the game goes win or loose. I think it was surprising to both of us that we both had 40/60 points going into round 5 (tied with a couple others for 7th place). Unfortunately we were put on the super old board that is nothing but white foam... oh well. 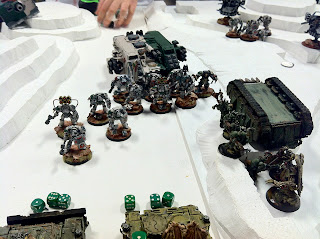 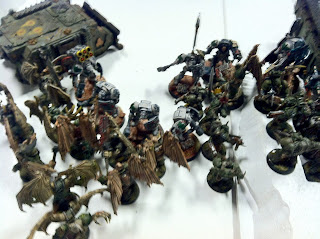 My Possessed rolled a 6, POWER WEAPONS!!! That was a good omen for game 5. First couple of turns not much happened (dawn of war :P). Jay only managed to pop one Rhino, but it had the Lord in it which got assaulted by the Command Squad and Friends. I was able to do a little damage before I lost the Lord. In my turn however I counter assaulted with the other Lord and two Plague Marine units. Both my PFs got to swing at Belial, killing him while good positioning meant my Lord didn't get killed. My Possessed went into the other Terminator unit and eventually killed them, but even with S5 PWs it took most of the game. 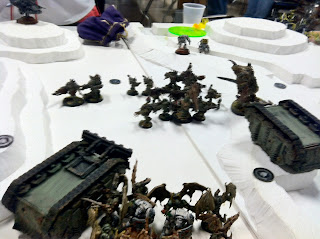 On 4 my two Oblit units dropped on within 6" of his two tanks while two Plague Marines moved into range of a Speeder. Jay later came to say "Kingsley rolled a perfect game". Not far from the truth. All three vehicles exploded on natural 6's while some Plague Marines with blotters killed THREE Terminators! 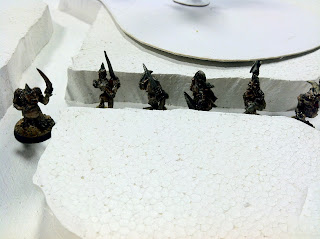 Nurgle Victory 20/20
I have to admit this was not a good game for Jay. His rolling was pretty horrible (he even scattered 10" off the table with a Terminator unit) but he never lost his cool and was very gracious about it. We bought each other a beer and spent the extra hour walking around and taking pictures.

My total Battle Points for the 5 games was 80/100. That was much better than I had anticipated or even wished for using Chaos. The last two years at Alamo combined I won three games, this year I won 4!
I later learned that 4 our of my 5 opponents gave me their "Fluff Bunny" vote which accounted for 4 additional points... and according to John Bailly, the tournament organizer, was the difference needed to win me the Jim Bowie Award (1st Overall)!
What the Hell?! Chaos finished First? Who needs a new Codex right? 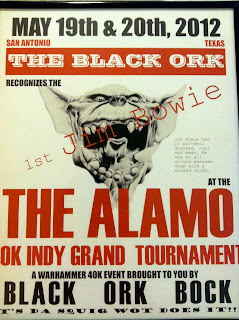 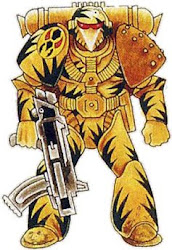 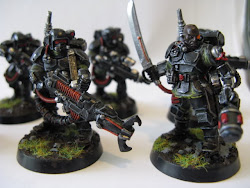